In a previous article, we talked about FallProof System’s recent work on the Pulaski Skyway. As part of the New Jersey Department of Transportation’s $1.8 billion renovation project, FallProof installed a custom debris netting solution to help road workers remove a section of the skyway’s old roadway. Today, we’ll take a look at another historic renovation project where FallProof provided a debris netting solution.

As we explained in the previous article, FallProof uses Roc-Bloc, a special nylon netting that is strong enough to catch and hold large chunks of wood or concrete. A fine-mesh debris liner is placed inside the netting to catch small objects such as nails, screws, bolts, splinters, or tiny chunks of wood, concrete, or plaster, which might otherwise fall through the spaces in the net weave.

The Comstock Covered Bridge Renovation – The Comstock Bridge spans the Salmon River on Route 16 near East Hampton, Connecticut. It is listed on the National Register of Historic Places, and is one of only three remaining covered bridges left in the state. Built in 1840, the builders used a then-new design called the “Howe Truss,” which combined vertical iron rods and diagonal timbers in the support frame. The “Howe Truss” design later became a staple of railroad bridges in the 19th century. But even the best-built structures don’t last forever. After 170 years of use, the Comstock Bridge had fallen into disrepair. In 2010, the Connecticut Department of Transportation decided to renovate the historic structure. Their plan was to dismantle the bridge and completely rebuild it, using as much of the original material as possible in its reconstruction. 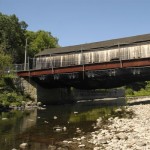 Prior to the dismantling, the Connecticut DOT hired FallProof Systems to install netting underneath the span to catch falling pieces of wood and other debris. The Connecticut DOT was especially worried about the old iron nails used in the original construction. These nails had been made in the 1840s using arsenic. If they fell into the river below, the nails had the potential to pollute the water and poison fish or animals. The existing bridge did not have a lot of structural strength in the girders that run underneath it. But in 2007, steel girders and poured concrete posts were installed under the span as a temporary measure to keep it from collapsing. 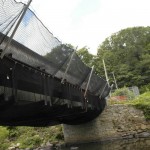 FallProof’s engineers designed and installed a cantilevered bridge netting system. Outrigger arms were attached to the steel girders on both sides of the structure using steel brackets. Debris netting was then installed by stretching it underneath the bridge, from one set of outrigger arms to the other, and pulling the netting taut so that it was over the stream, but above the 100-year flood elevation. In effect, it was like stringing a large trapeze net underneath and outward from the structure. FallProof completed this installation in one week to keep the balance of the project on schedule. After the Comstock Bridge was completely dismantled and rebuilt, we returned to remove the debris netting.