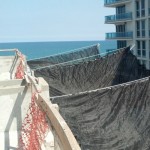 Construction sites and demolition operations come with their own set of unique fall hazards. Putting people in serious danger and structures at risk for major damage, these scenarios have potentially costly ramifications in terms of both lives and dollars.

Your site’s specific needs determine which application you should employ. The following are the most common situations in which safety netting is installed to protect people and structures:

Critical Usage #1: Loose Construction Materials
Construction sites are often messy places, with materials such as loose wood, rebar and buckets of nails and screws strewn everywhere. All of these items present debris fall hazards to the public and workers below.

Horizontal perimeter construction safety netting systems help contain and corral this debris so it doesn’t fall and seriously injure a person or structure below. These systems generally use personnel rated nets with a debris liner to provide OSHA compliant fall protection for workers at height while also preventing objects from hitting people below.

Critical Usage #2: Loose Tools And Equipment
Imagine a large-wheeled cart or a hand tool rolling off the edge of a structure and falling to the crowd below. Without a preventive system in place, this is an extremely dangerous scenario.

Again, horizontal perimeter systems that are cantilevered off the side of the building are able to stop this danger by preventing the cart from dropping all the way to the ground.

Critical Usage #3: Existing Deterioration
With any erected or existing structure, there is great potential for materials and debris to fall. This is an especially common occurrence with old bridges.

By installing a debris netting system around and under a bridge before any repair work begins, you protect the people and objects below.

Critical Usage #4: People And Personnel
Working at heights is dangerous, and people are often subject to falling through the interior of a building or off its exterior.

Personnel netting solutions strung along the inside of a steel frame on construction sites serve to catch people who fall through the floors that are not yet poured. These are often called same-floor systems, and they allow workers the freedom of mobility without the need to be tied off via a lifeline. They can also be used to protect elevator shafts and other temporary voids.

In addition, horizontal perimeter systems protect people and objects as described above. Or, you could use specifically designed safety netting mesh as a temporary guardrail to prevent people from walking over the edge.

While there are no specific OSHA regulations or ANSI standards that dictate the use of fall protection nets for a specific application, OSHA Part 1926 includes a broad regulation stating that employees working at an elevation of more than six feet must be protected. Netting is a versatile tool to help the employer meet this requirement.

Ready to learn more about installing the right safety netting systems for your construction site or demolition operation? Click on the button below to speak with an expert at FallProof.