Self-Rescue: The Best Fall Protection Equipment For It 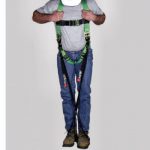 The term self-rescue is a bit misleading. If a worker takes a fall, and a self-retracting lifeline (SRL) or other fall protection lifeline stops their fall, there might be situations where an unassisted self-rescue is possible. They might be close enough to a ledge or floor level to be able to reach out and grab it and pull themselves up on to it.

In most situations, however, they will need some assistance from others, even for self-rescue. If they can’t pull themselves to safety, they usually have to wait, suspended in a safety harness, for several minutes until others can either lower them to the ground, or pull them in to a nearby ledge or floor level.

But there are still some actions that the suspended worker can take in order to protect themselves from Suspension Trauma Syndrome. As they are awaiting rescue, they can use special personal protective equipment to redistribute their weight and take potentially damaging stress off their body.

What is Suspension Trauma Syndrome?

Every person who uses fall protection equipment should be aware of Suspension Trauma Syndrome. When a worker is hanging suspended in their safety harness, gravity is still pulling them down. The weight of their upper body is centered on the straps around the tops of their legs, at the pelvic region. This causes those straps to tighten, which constricts the blood flow between their hips and legs, an important area of circulation in the human body.

As the body hangs in the safety harness, blood begins to pool in the leg veins. The restriction of blood flow takes oxygen away from the brain and other vital organs, and may cause the person to pass out, especially if they are hanging for fifteen minutes or more awaiting rescue (the effect is similar to crucifixion.)

Even worse, after the worker is rescued, they may still be in danger. After being released from the effects of gravity, and from the constricting straps of the harness, the blood that has pooled in their leg veins can suddenly rush back into the heart.

This is known as “reflow syndrome,” and may result in “rescue death,” especially in older persons or workers who are out of shape. They may seem fine after being rescued from suspension, but may suffer a heart attack several hours later. A sudden increase in blood pressure and heart rate due to the release of trapped blood may damage the heart or send blood clots into the circulatory system.

Fortunately, there are several ways that workers who are hanging in a safety harness after a fall can relieve the stress on their body and help prevent Suspension Trauma Syndrome. The first of these are suspension trauma safety straps.

Suspension trauma straps are long nylon straps that can be attached inside small storage packs to the sides of a body harness. While a suspended worker is awaiting rescue, they can pull out the suspension straps on both sides of their harness, hook them together, and “stand up” inside the connected strap (see photo above). This puts the weight back on their feet, and takes the pressure off the safety harness straps around their upper legs, allowing their circulation to flow more freely. 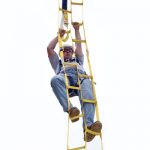 Rescue ladders and suspension loops are essentially rope ladders with rungs or nylon foot loops. If a worker is hanging suspended in a safety harness, a co-worker can attach a rescue ladder or suspension loop ladder to an anchor point on the floor or platform above them, and lower the ladder down to them.

At this point, the worker may be able to “self-rescue.” They may be able to climb up the rope ladder or suspension loops, and have other workers pull them to safety. If not, they can at least take the pressure off their body and stabilize their circulation by standing on the rope ladder rungs or in the suspension loops, until they can be properly rescued (see photo).

In a recent article, we talked about how self-retracting lifelines are the ideal lifeline for use in fall protection systems. When a worker falls, the SRL automatically locks up like a seat belt and arrests their fall within 3 1/2 feet. However, a worker wearing a 6-foot shock-absorbing lanyard must fall at least 9 1/2 feet (6 feet for the lanyard plus 3 1/2 feet of deceleration) before their fall is arrested.

As we stated before, the SRL is the better fall protection lifeline, because it’s less stressful to fall 3 1/2 feet than 9 1/2 feet. Using an SRL can also help to prevent Suspension Trauma Syndrome, because of the shorter fall distance. When a worker has only fallen 3 1/2 feet, it may be easier for their co-workers to reach them. They can be rescued faster, and won’t hang suspended in the safety harness for very long.

In future articles, we’ll talk about how to set up a fall rescue plan for your facility, and how to rescue suspended workers quickly and effectively. For now, keep in mind that proper fitting of the safety harness, and frequent inspection and proper use of fall protection equipment are good practices to help protect workers from injury in the event of a fall.