Vertical Lifelines: The Ups and Downs 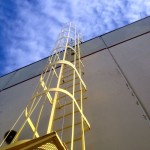 Vertical lifelines are an essential protection system if you have a fixed outdoor or indoor ladder that is higher than 24 feet. Every year, dozens of workers injure themselves in falls from fixed ladders, usually after slipping on rungs covered with mud, grease, rainwater, snow, or ice.

Vertical lifelines should be mounted onto fixed ladders to provide fall protection for following types of structures:

There are several different kinds of vertical lifelines. They all have one thing in common. Each type of system allows the worker to safely climb up and down the entire length without having to disconnect their safety harness and reattach it to a new anchor point. 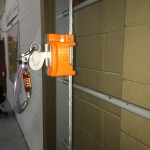 A vertical cable lifeline consists of a taut steel cable that is attached to anchor points at the top and bottom. The cable runs alongside or along the center of the ladder. A trolley device called a rope grab or “fall arrester” runs up and down the cable.

When a worker uses the ladder, they attach a carabiner on the fall arrester to a D-ring on their safety harness. As they climb up or down, the arrester travels with them along the cable. If the worker falls, the arrester instantly locks up on the cable, and arrests, or stops, their downward movement.

A vertical track lifeline works in much the same way. In this type of fall arrest system, a steel track is attached to the rungs with clamps, so that it runs up and down the center of the ladder. The track holds a braking fall arrester with a carabiner attached to it.

Again, the worker clips the carabiner to the D-ring on their safety harness, and the fall arrester travels with them along the vertical track as they move up or down. If the worker falls, the arrester immediately locks up on the track and stops their downward movement.

A Self-Retracting Lifeline (SRL) system is the best option when a vertical track or cable system can’t be installed. A single-point anchor is attached to the roof at the top of the ladder, and an SRL is attached to the anchor. The worker attaches the SRL to their body harness, and the SRL either retracts or “lets out,” like a seat belt, as they move up or down. If they fall, the SRL locks up and arrests their fall.

A vertical SRL used as a lifeline usually includes a tagline. The SRL is connected to the anchor point and a thin rope is attached to the carabiner on the SRL. This rope hangs down to the bottom of the ladder. When workers need to utilize the SRL, they use the tagline to pull the carabiner on the SRL down to the floor or ground level and attach it to the D-ring on their harness. This prevents the user from having to climb up and be at risk before being connected.

Vertical SRLs can also be used in industrial facilities, such as on the tops of large food processing or chemical vats. An SRL with a single-point anchor can be installed at the top of a vat along an unprotected edge, to allow workers to move safely along the top while cleaning, servicing, or inspecting the vat.

Many organizations make the mistake of thinking that ladder cages provide adequate protection for their workers. A cage consists of a series of circular safety hoops surrounding the ladder. All fixed ladders over 24 feet in height are required to have a cage or other fall protection according to OSHA regulations.

But ladder cages only provide safety if a worker falls backwards on the ladder. These cages are not designed to stop or prevent vertical movement. If a worker falls straight down and cannot regain their grip, they can injure themselves or other workers below. A vertical lifeline is highly recommended for any permanent fixed ladder.

Whether outdoors or indoors, vertical lifeline systems should be inspected regularly, to make sure they are functioning properly. Outdoor systems are especially vulnerable to wear or damage from elements like rain, snow, and ice, and extreme temperatures, while indoor systems may deteriorate from being in a corrosive environment, such as a steel mill or chemical plant. Both types, outdoor and indoor, will suffer wear and tear more quickly if they are used frequently, i.e. on a daily or weekly basis.